Neuro-Bio and BMB hosted an event in London

“Disruptive science and how to explore it, value it and sell it”

Neuro-Bio and BMB hosted an event in London on 16th October. In the event, experts in the business of biotech and neurodegenerative disease research formed a panel to discuss the main issues of the day from money to complexity and how things can be changed to really make an impact in the sector. The panel was moderated by Clive Coen, Professor of Neuroscience at King’s College London and scientific advisor at Neuro-Bio.
Nick Stephens, executive chairman of the RSA Group, a leading life sciences executive search firm, provided an overview of the current landscape. “The biotech industry is dependent on a combination of three things. First, prepared scientific minds. Second is the availability of enough funding to run experiments and third, problems to solve.”

Barbara Domayne-Hayman, Entrepreneur in Residence at the Francis Crick Institute agreed that the business model in life sciences has changed. “Pharma increasingly buys in innovation and in some cases has given up on trying themselves. I think one of the very sad announcements recently was that Eli Lilly announced they are closing down their neuroscience site which was the last big pharma site devoted to neuroscience in the UK. That’s a real blow to the industry and I think to neuroscience as a whole as it sends a bad signal. However, there’s also an opportunity there because it means they are going to be buying in those innovations from the biotech sector. There are possibilities for smaller, more innovative companies to come up with solutions and that’s very positive.”

Ricky Martin is the founder and MD of Hyper Recruitment where he is focused on mid-level to senior appointments for the science and technology industry. He recognised that not everyone is cut out to be an entrepreneur but it still takes work to attract talent. “Sometimes it’s great to go into growing firms and understand how those firms work, what their focus is, what their missions are and understand the lifecycle of growth of a company to then go into business further down the line where they can bring talent in. The great news for the UK is that there is a real hunger to work for an SMB or a startup or a new business, it’s not all about working for a big pharma company anymore.

Lab research and consumer marketing might not immediately seem like easy bed fellows, however, since Baroness Susan Greenfield CBE launched her company Neuro-Bio to tackle the problem of Alzheimers, she realised that bringing in BMB to collaborate on marketing could also bring her business to fresh eyes and attract more investors.

Later in the evening, the company CEO Jason Cobbold chatted with Baroness Greenfield about the development of her business and she in turn asked him about how marketing firms can approach the sciences.

The conversation kicked off with a story of course, and this one is how Baroness Greenfield came to run a private company pursuing an end to neurodegenerative diseases.

To describe neuroscience in a nutshell is not easy but the short version of what NeuroBio does sounds like this, “We have a new approach to Alzheimers where we suggest that the whole problem has been that no one has really identified the mechanism driving neurodegeneration.” Baroness Greenfield continues, “In our arrogance, we think we have and that mechanism is an inappropriately activated form of development. While development is a great thing in the embryo, when it is inappropriately activated we are suggesting this leads to neurodegeneration. Where we are different is that where most people tackling Alzheimers have looked at things like amyloids – we ask why is it only certain cells are dying? What is special about them? We don’t think anyone else has answered those questions.”

Jason noted that presenting a modern face for science to the outside world can be tricky. “It strikes me from the outside that science is the pursuit of a very pure purpose and sometimes there is a sort of sense of contamination with marketing. What are the issues around that? Technology has learned to market itself extremely well, but is that the case for science?” he asks.

“Often science is considered the ‘nerdy’ thing,” says Greenfield. “I think we do have an image problem and that’s why working with a company like BMB can actually start to help with that. I think this is a healthy relationship to encourage because it is a win-win situation. It’s great for you in the challenge and creativity that science poses and it’s good for science as it means we are much more attractive to investors if we can package ourselves in a way that people are comfortable with.”

Turning the tables, Baroness Greenfield asked Jason if he saw any hurdles in working with scientists, “I think there is a misconception that marketing is somehow changing substance of something,” he says. “But look at all the brands that we love, there is an authenticity about them and you don’t try and hide that. I think there’s a little bit of grappling with that. Marketing has jargon too, so how do we make sure people understand what we are trying to do. Working with scientists is not hard though, the rationality is a good thing. If you have a reason why you don’t like something you tell me very directly.” 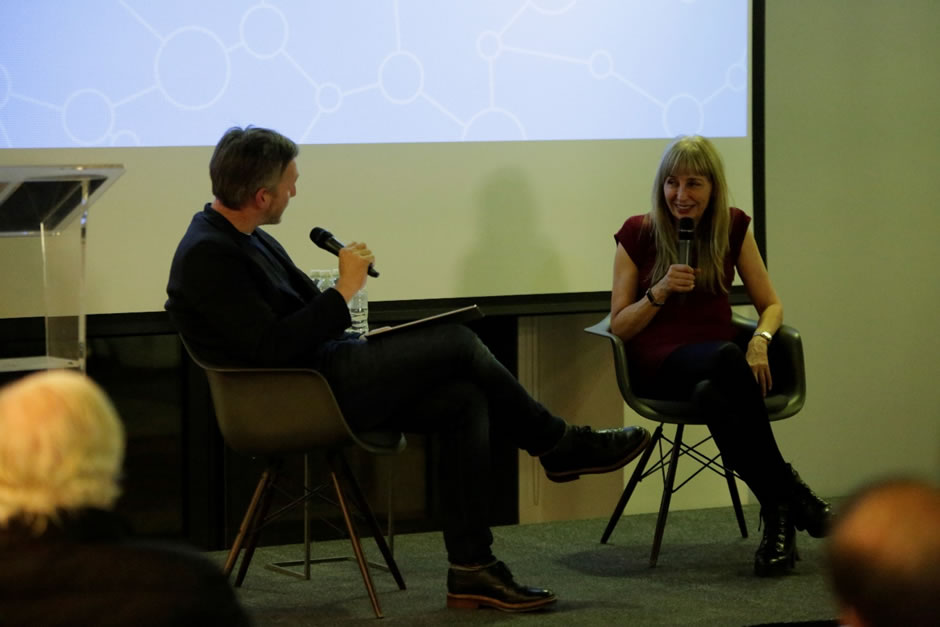