Based on almost 40 years of research by Professor Baroness Greenfield at Oxford University, Neuro-Bio Ltd was incorporated in 2013, when seed funding enabled the first patent filing on chemical composition of matter for neuroprotection. Sited originally at Milton Park, in 2014 the company expanded the scientific team and moved to more ample offices and labs at the Culham Science Centre, Oxfordshire which were subsequently refurbished to meet our bespoke requirements. Between 2015-2016, Neuro-Bio validated and developed its novel hypothesis of the neurodegenerative process in AD, that for the first-time accounted for all the known clinical facts. Over the subsequent 5 years, the following milestones were achieved: (a) Demonstration that the key pivotal toxin T14 is indeed a feature of the AD brain, where it is doubled in post-mortem midbrain and recapitulates the pattern seen in the developing rat brain, supporting the hypothesis that neurodegeneration is an inappropriate re-activation of development; (b) Identification of the molecular target (alpha7 nicotinic receptor) of the toxin where it enhances calcium entry, thereby inducing excitotoxicity and further proliferation of the receptor itself, so perpetuating a feedforward cycle of neurodegeneration. (c) Demonstration that a cyclised variant of T14, NBP14, acts as a blocker of the toxic action at this receptor, that could lead to an effective therapeutic drug; (d) Based on the same scientific rationale Neuro-Bio patented a possible blood test whereby detection and measurement of this toxic molecule T14 could act as an early biomarker of AD progression, as well as having applications to oncology and dermatology. 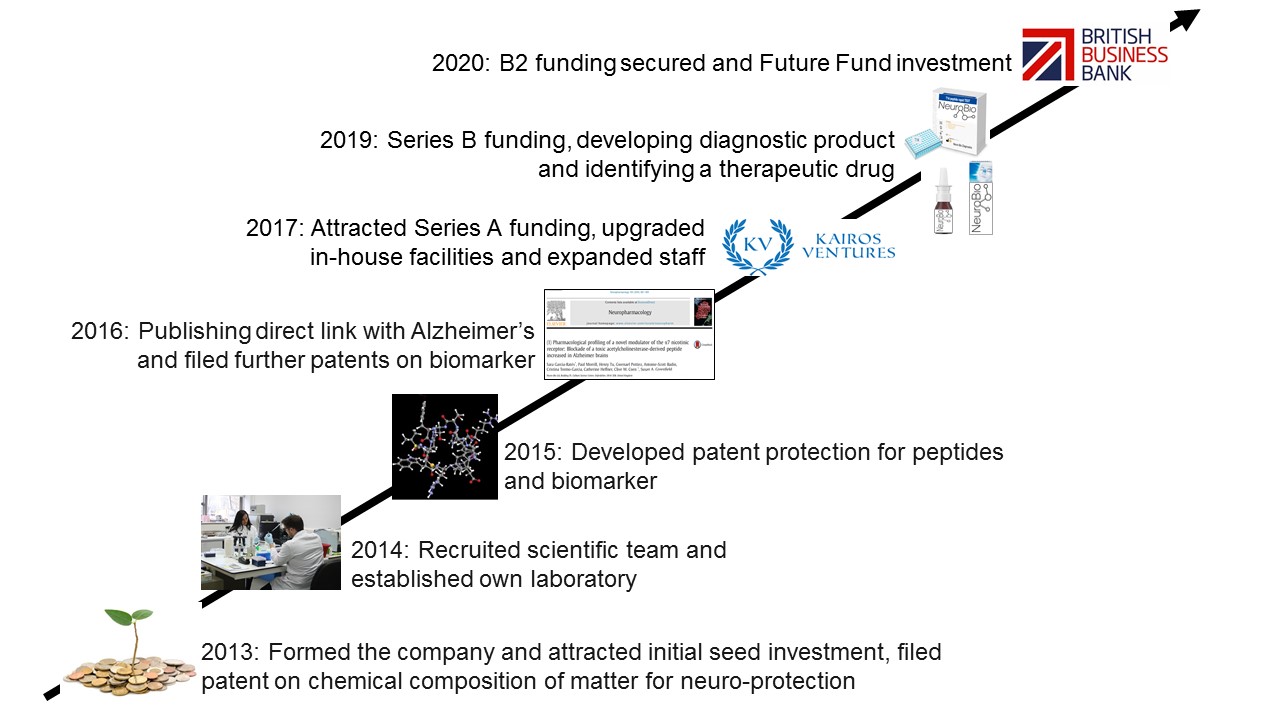 To develop a first-in-class effective treatment and companion diagnostic for Alzheimer’s disease with the potential to halt the characteristic cycle cell death at the presymptomatic stage.