A DISRUPTIVE APPROACH TO NEURODEGENERATION

What is the idea and why is it so novel?

Neuro-Bio’s idea is novel because it takes as its starting point the two general shortcomings of conventional approaches to Alzheimer’s Disease (AD): (1) The most usual rationale is based on some kind of proposed malfunction at the level of the generic cell be it, for example, APOE (Liu et al, 2013), Aβ expression (Makin, 2018), tau phosphorylation (Iqbal et al, 2010) or inflammation (Wyss-Coray et al, 2012). Yet whilst these events might indeed form part of the later-stage clinical picture, they could be dysfunctions occurring in any neuron irrespective of its location, morphology, or neurochemical signature.

By contrast we know that, early on, AD degeneration starts in a region-selective manner, where only certain cell groups are primarily vulnerable (Akerman et al. 2019). Even though particular pathological cellular features might form part of the eventual toxic cascade in AD, their mere presence, the centrepiece of most reasoning, does not actually prompt any explanation as to how and why the neurodegenerative process has, in the first place, been set in train.

One of the most glaring, yet under-explored, aspects of AD is that not all neuronal groups are equally vulnerable. Neurodegeneration does not automatically follow after brain injury nor stroke, and this should surely prompt the question: why not?

If we could identify the common feature of these cell groups that distinguished them from all the other neurons in the rest of the brain, then surely that would provide a clue as to the basic mechanism itself that drives the continuing feedforward cycle of cell loss. 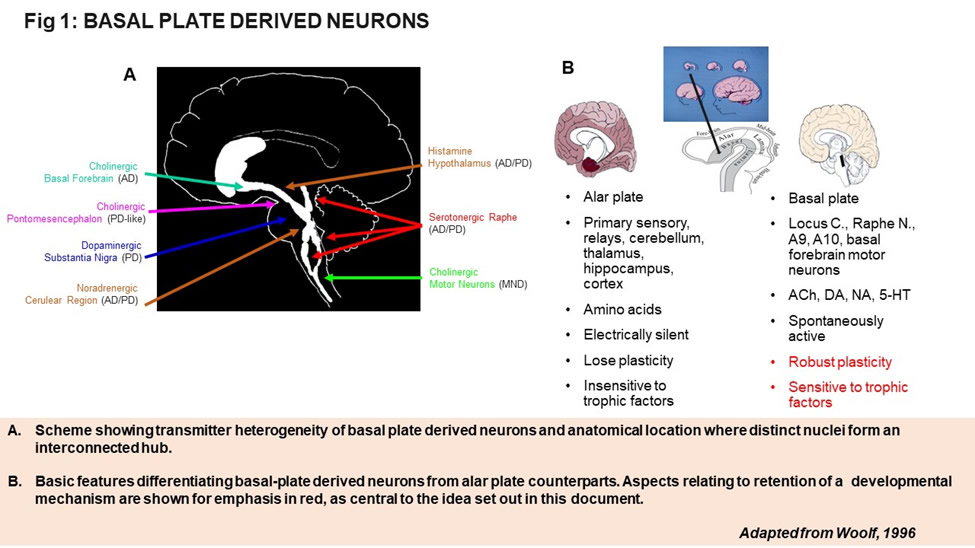 This fundamental distinction, which is apparent as early as 4 weeks gestation, surely suggests that the cells primarily prone to degeneration could well have very different basic properties from other brain areas, that in turn might provide an important clue regarding their vulnerability, and hence to an eventual insight into the cause of AD.

One key difference in particular that may be highly relevant, is that basal plate derived cells retain their developmental potential into maturity, with central axons maintaining a robust plasticity and the neurons in general an increased sensitivity to trophic agents that is not seen in the alar-plate derived cell populations (Woolf, 1996).

This persistent capacity for growth, based on a normal developmental system controlled by feedback in the early stages of life, could provide a clue as to why, in adult life, such cells will now succumb to a continuing process of gradual cell loss.

Accordingly, if any of the basal plate derived cell groups are damaged for whatever reason, such as a blow to the head, a transient ischaemic attack, or a decline in scavenging mechanisms, the outcome will be different from that of an equivalent insult to their alar plate derived counterparts.

Unlike in the rest of the brain, this damage will trigger in retaliation the homeostatic mechanism of compensatory cell growth selectively retained by these particular cells into adulthood. However, the problem is that now the brain is fully mature and the amount of calcium influx that would normally have enabled cell growth during development, will be excitotoxic in the context of the older brain: hence more cells will die and the cycle of cell loss will be perpetuated and amplified.

The erstwhile feedback system has now become one of feedforward toxicity that we recognise as neurodegeneration.

If the cells prone to AD degeneration are characterised by an inappropriately activated signalling system for cell growth, it might be expected that they operate by means of a common transmitter system: but this is not the case. A range of diverse amines characterise and operate in the respective nuclei: dopamine in the VTA substantia nigra groups, 5-HT in the Raphe nuclei, norepinephrine in the locus coeruleus and acetylcholine (ACh) in the basal forebrain (Woolf, 1996) and Fig 1. However, irrespective of diverse transmitter systems, all of these cells do express a common molecule: the very familiar enzyme acetylcholinesterase (AChE), Fig 2. 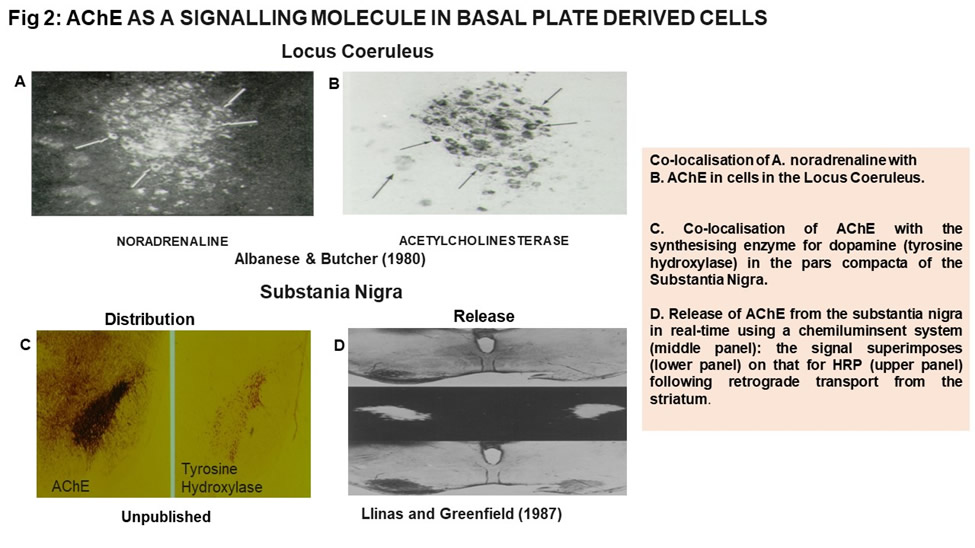 What is the salient part of the AChE molecule driving neurodegeneration?

Two separate labs have each reported the prevalence in embryonic and early postnatal development of a monomeric form of AChE (G1) (Arendt et al, 1992; García-Ayllón et al, 2010). In AD brain and blood, this single catalytic subunit, the monomer G1, is far more dominant and recapitulates the profile found mainly in developing brain.

Not only do these studies suggest that neurodegeneration could somehow be a reactivated form of a developmental process, but they also indicate that the oligomerization of AChE could be critical.

The G4 form of AChE is dependent on disulphide bonds which include a 14mer peptide at the C terminus, with homology to Aβ (Greenfield & Vaux, 2002). The potentially bioactive active part of the AChE molecule has thus been identified as this peptide, ‘T14’: AEFHRWSSYWVHWK (Fig 3).

Once the peptide has been cleaved from AChE, various reports have led to the identification of the target for T14 as an allosteric site on the alpha-7 receptor (Greenfield et al, 2004): this receptor has a calcium permeability, and thus potential for mediating trophic-toxic effects, even greater than NMDA (Seguela et al, 1993).

In the transgenic AD mouse (elevated Ab1-42) it is upregulated (Svedberg et al, 2002) binds amyloid peptide (Aβ) and is thereby implicated in AD in conjunction with Aβ (Dineley et al, 2001).

However, the most cogent reason for suspecting that this receptor might be the target for T14, is that it coexpresses almost in lockstep with the appearance of AChE in the developing brain (Broide et al, 1996), even in areas where there is no cholinergic transmission. Ex vivo studies have exploited the symmetry of the brain in coronal section, to separate down the midline the two hemi-sections of living brain slice, incubating one side with T30: the result was an enhancement of both Aβ and tau from the treated sections, compared to the perfectly matched, but untreated control side (Brai et al, 2017), Fig 4.
. 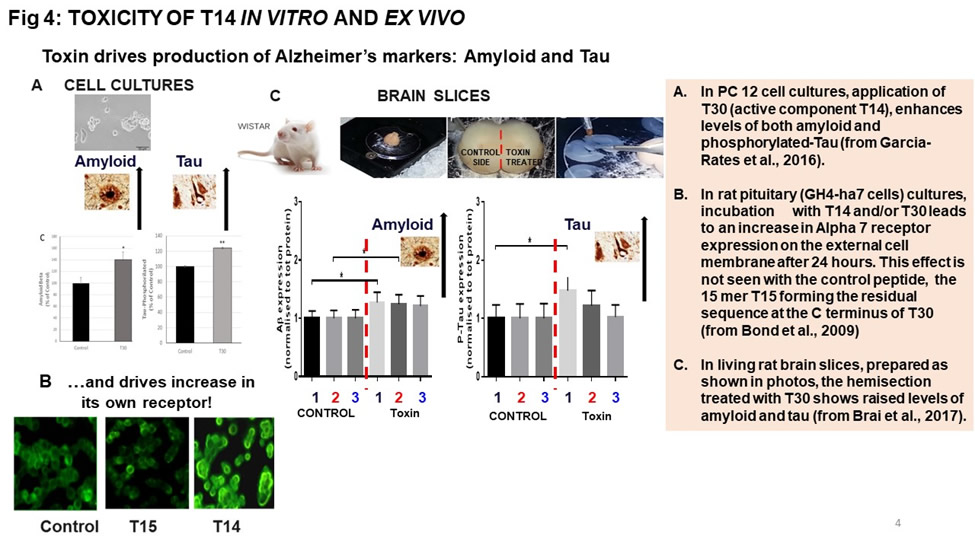 The T14 trophic-toxic pathway has been investigated using selective blockers of intracellular events (Day & Greenfield, 2004) and can then be traced as follows: T14 will bind (greenfield at al, 2004) to an allosteric site on the alpha 7 receptor to enhance calcium influx (Bon & Greenfield, 2003), causing depolarization and activation of voltage sensitive calcium channels (Dickinson et al, 2007). The net increase in intracellular calcium activates the cascades shown in the diagram (Fig 5). 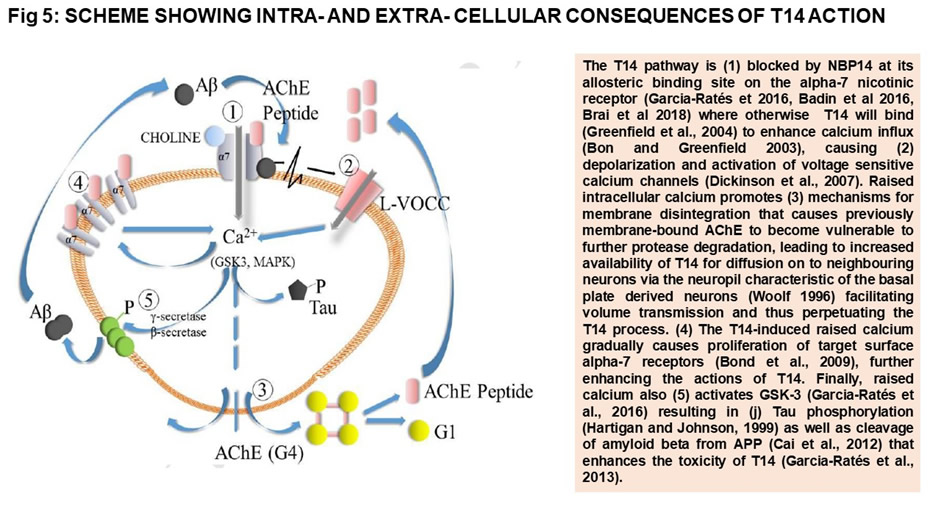 However, a feasible explanation for why these drugs have met with limited success would be that in AD, the site in question will already be occupied by endogenous T14, acting as a more effective ligand than synthetic candidate compounds that are unable to compete effectively. The solution has therefore been to adopt a completely different strategy, to use the naturally occurring T14 molecule against itself.

NBP14 has proved in both in vitro (Garcia-Ratés et al, 2016) and ex vivo studies (Badin et al, 2016; Brai et al, 2018) to be non-toxic when applied alone, but protective against a range of linear peptides: Aβ, T14, and T30, the more stable peptide containing the active component T14 (Bond et al, 2009). The drug appears to have no effects other than blocking the action of its linear counterpart on: calcium influx, cell viability, and AChE release in PC12 cells, where it also blocks the toxic effects of amyloid (Figure 6).

In addition, within the CNS, NBP14 blocks the action of T14 on large scale neuronal activity, as monitored with optical imaging in living brain slices (Badin et al, 2016). In a subsequent ex vivo preparation, it was shown that NBP14 competes with T14 for its binding site (Brai et al, 2018). 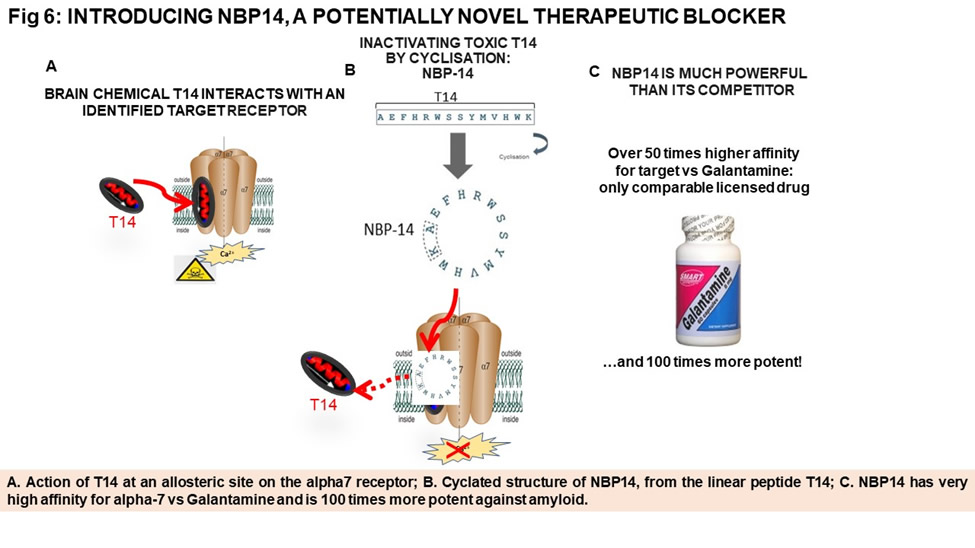 Why does this particular approach hold out more promise for understanding and treating AD?

So far over 150 programmes targeting Alzheimer disease have all failed in the clinic. Meanwhile 80% of funding has been to target brain Aβ, yet the ‘amyloid hypothesis’ is increasingly being challenged, for example by Morris and colleagues (Morris et al, 2014) who summed up the position with some accuracy by citing the venerable science philosopher Karl Popper: ‘Whenever a theory appears to you as the only possible one, take this as a sign that you have neither understood the theory nor the problem which it was intended to solve.’

This form of inter-cellular communication would not be restricted to nervous system signalling and as such could represent a very basic system for triggering calcium entry into a wide range of cells for promoting growth, that would have the further advantage of allowing interfacing between the three great control systems of the body, – nervous, endocrine and immune.

On the other hand, it is surely only by exploring and appreciating the most basic processes underlying body function, such as those driving cell growth, that we shall be able to tackle the root cause of the problem.

The hypothesis that the process of neurodegeneration results from an aberrant deleterious triggering of a previously normal, albeit unidentified, developmental process is not new (Butcher & Woolf, 1989). However, over the past two decades, empirical evidence has mounted for a link between the basal plate derived nuclei, their persistent sensitivity to trophic factors, and their vulnerability to neurodegeneration.

It is now possible, finally, to start putting these various pieces of the jigsaw together with reference to the novel T14 signalling system: in so doing we can appreciate a more dynamic picture of the neurodegenerative process and thereby gain insights for, at last, laying to rest the spectre of AD.

You have Successfully Subscribed!